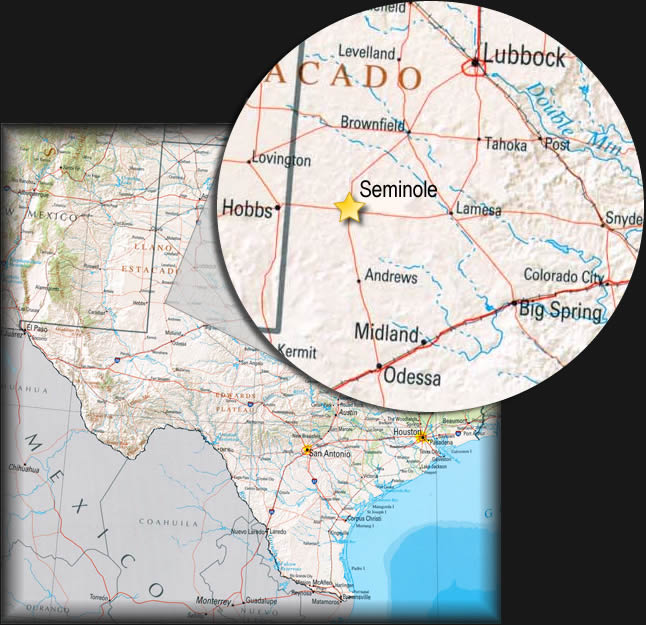 Gaines County was named for James Gaines, who was born in Culpepper County, Virginia in 1779. The early culture of Gaines County was purely wild Comanche and Mexican. For a century or more before the conquest of the Plains by Americans, they were annually invaded from the west by Mexican Comancheros, or traders, almost all of whom did a thriving business with the Plains Indians. Due to the vigilance of the hardy Comanches and their fierce warlike spirit, the Americans had not been able to penetrate the eastern approaches to the Plains until the campaign of 1871-72 and 1874-75 when Cols. Mackensie and Shafter of the U.S. Army had located the waters and opened the territory for further exploration.

In October 1875, Lt. Bullis of the Shafter command (24th Infantry) encountered a large bunch of Indians at Cedar Lake and took from them a large supply of food, buffalo hides, and utensils. Col. Shafter then established a camp at Cedar Lake and continued to scout the area as far south as the Pecos River. In November he reached the draw about 2 miles south of the present city of Seminole and there before his astonished eyes were one of the most amazing water development projects known to any country! In the middle of a sand-locked desert were some 50 wells, and about 3 miles further west he found about 20 more such wells, ranging from 4 to 15 feet deep. This area became a regular place to meet and trade goods.

In 1883 – 1887, the northwest part of the county was occupied by the Mallet Ranch (and later the Higginbotham Cattle Company). Their foreman, Dave Ernest, was the first man to fence in this part of the country. Later the ranch was bought by a San Antonio merchant, Mr. Half. He used it to winter steers that had been driven up here, then they would be shipped to market in Kansas the following spring.

In the late 1880s, the present day Gaines County was made a part of Martin County and Stanton was the county seat. The land rush in Gaines County started in 1902-1903. Four sections were allowed to be filed on for homestead purposes. After they had lived on the land for 3 years and proved up on it, the title was vested in their name.

Gaines County was organized on October 24, 1905. When the land for Seminole (320 acres) was donated by non-resident landowners to be the county seat, W.B. Austin & his wife Emma decided to move their general store, then located at Caput, into Seminole. (Caput was located about a quarter mile southwest of the present-day Gaines County Cemetery). They moved the building into Seminole in the spring of 1906, although many people told them they would not be able to move the building across the draw. But they sawed the building in half and moved it in two sections by a horse. It was a tall building with an upstairs area where the Austins lived, and where Mrs. Austin ran a free hotel for passing cowboys for years.

In the early days of the county, there were quite a number of post offices. Some were moved from time to time, and most of them were abandoned as transportation facilities increased. One of the first was Eclipse, located about 20 miles west and a mile south of Seminole. The Bessie post office was located at the home of Clint Dean, 2 miles south of the Hugh Wristen Ranch. The Hollebeke post office was 25 miles southeast of Seminole, first at the Pete Hollebeke place and then later moved to Florey. Another was Hatchett, located about 15 miles southeast of Seminole. Craddock was a few miles west of Cedar Lake on the east side of Sawyer Flats at the home of Dr. Craddock, and the Ashmore post office was located 20 miles east of Seagraves and about 5 miles north of Cedar Lake at the Ashmore residence.

The town of Loop got its name from the cattle brand used by the ranch whose headquarters served as a post office early in the community’s history. The Loop became the name of the post office when it was established in 1912. In 1916 the post office was moved to the Parkinson home a mile south of the present town of Loop.

Blythe was the name of the post office where Seagraves is now. This post office was in the home of S. J. Blythe, and when the railroad moved into that vicinity in 1917, the name was changed from Blythe to Seagraves. The Santa Fe already had one town by the name of Blythe in California, and they insisted the name be changed. After some controversy with postal officials, the name was changed to Seagraves, being named for an employee of the Santa Fe Railway, Charles Seagraves, who worked there as a traveling passenger agent.

In 1917 the first building was erected in Seagraves-the office of the Spearman Land Company. Higginbotham Bartlett Lumber Company also moved there in 1917. The first barbershop in Seagraves was housed in a tent in that same year.

Seagraves grew rapidly as a town, and in 1928 a major portion of the business section burned when both sides of a block-long section went up in flames. Only the Seagraves Motor Company building was left standing on the west side of the street. The town was immediately rebuilt with modern brick buildings, many of which line its streets today.

At one time or another, Gaines County has been the home to as many as thirty-three school districts. Today we have three, Seminole, Seagraves, and Loop. Most of the early schools had a one-teacher, one-room school. In 1910, Dan Cobb contracted with the school board to construct a new two-story school house on the property now used for the Elementary school. Four classrooms were downstairs and the 2 classrooms upstairs completely housed the high school students as well as an auditorium. On top of the building was a cupola housing a large cast iron bell, which was heard all over town every morning.

A great addition to Gaines County came in 1977, when the first group of Mennonites arrived to set up farming and ranching operations, some 156 families. Today, Gaines County is home to approximately 3,000 Mennonite families. The Mennonite community celebrated their 25th Anniversary in August of 2002.

On this, our century mark, we think Gaines County looks pretty good for 100 years old. We look forward to growing even stronger in the future!

Closed for all major holidays